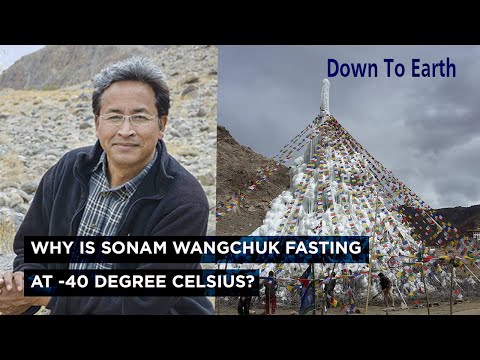 Sonam Wangchuk, an educationist reformer and Magsaysay award winner from Ladakh has decided to start a 5-day ‘climate fast’ from January 26, 2023. Fasting from the Khardungla top at -40 degree Celsius, he will be demonstrating the ‘power of the sun’ by using solar panels to generate electricity in an attempt to hold, arguably the world’s first ‘climate neutral fast’.

Ladakh is part of the Hindu Kush Himalayan range and Tibetan Plateau which is also called the ‘Third Pole’ because its ice fields contain the largest reserve of freshwater outside the polar regions. But in recent years, Ladakh has been facing acute water shortages because of receding glaciers and pollution.

Wangchuk wants to urge the Prime Minister to protect the fragile ecosystem of Ladakh under the 6th schedule of the constitution (which provides for the administration of certain tribal areas of the country as autonomous entities). About 90 per cent of the population in Ladakh is tribal.

Studies from Kashmir University state that two-thirds of the glaciers are under threat if tourism and construction continue at the current rate. Wangchuk also initiated the Ice Stupa Project, which are artificial glaciers that are used to freeze and hold water that keeps flowing down the streams, in the winter.

Glaciers in this ecosystem act as water reservoirs for South and East Asia, with more than a billion people depending on them. To prepare for the fast, he camped out at -20 degree Celsius on his rooftop at Hial Phyang. Wangchuk wants to educate not just the world but also the people of Ladakh about the looming threat of the climate crisis in the region.