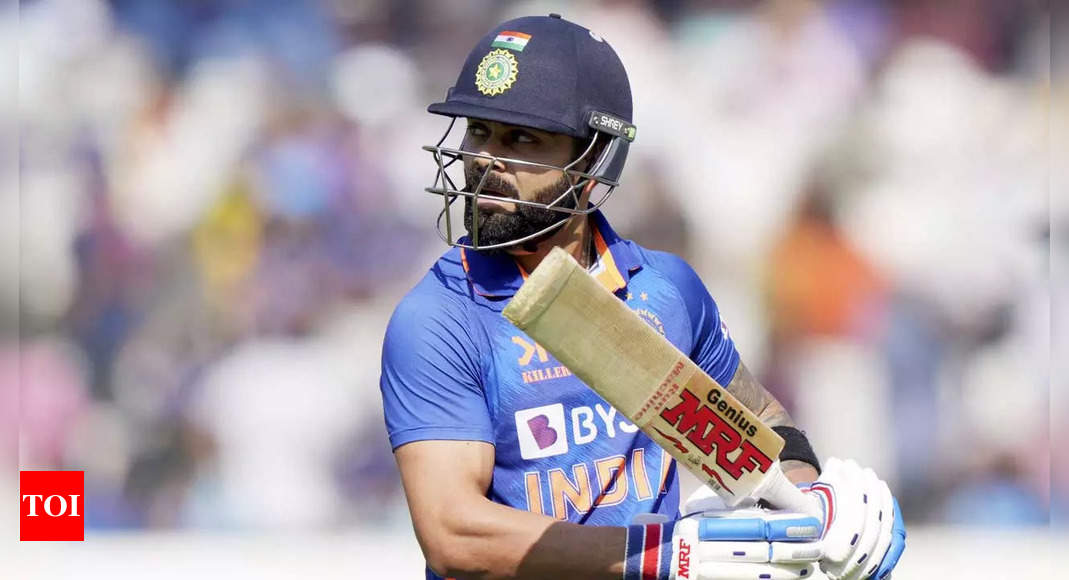 Share If you like it
INDORE: It was surprising to see Virat Kohli board the early morning flight from Raipur to this Madhya Pradesh town for the third and final ODI of the series against New Zealand at the MPCA Stadium here. Normally these days in India, both the teams are taken around the cities in a chartered flight. There was naturally a clamour in the plane for selfies with the cricket superstar, before the passengers were told by the flight attendants to avoid mobbing the former India captain.
Having stroked three centuries in his last four ODIs coming into the ongoing series against New Zealand — his ODI century tally has now swelled to 46, just three short of equaling the legendary Sachin Tendulkar’s record of 49 ODI tons — Kohli, having left his demons of poor form behind in 2022, must be enjoying sound sleep these days. However, what would irk the 34-year-old just that little bit in recent times is a problem that seems to have crept in his game slowly but surely — his slight vulnerability against quality spin, one that leaves the bat in particular.

Virat Kohli (AFP Photo)
While the alarm bells aren’t ringing yet, it’s something that may bother the team management — for all his magnificent ‘second coming’ since the Asia Cup in UAE last year, Kohli does seem to have a problem with spin, especially of late. Before India go into the iconic home Test series against Australia, which is likely to be played on square turners at Nagpur, Delhi, Dharamshala and Ahmedabad, he does need to work out a solution to the minor issues in his game against the tweakers. While the biggest ace in their four-man spin pack is the vastly-experienced Nathan Lyon, the Aussies have Ashton Agar, Mitchell Swepson and Todd Murphy to support him.
In both the games of the ongoing ODI series against the Kiwis, Kohli has been beaten neck and crop by two absolute ‘rippers’ from Kiwi left-arm spinner Mitchell Santner, who scalped him for 8 & 11. Both times, the flight and turn that the bespectacled Santner generated, had the 34-year-old classy batsman in a spin.
At Hyderabad, he had a bewildered look on his face after being bowled, as the ball spun away viciously after pitching, while in Raipur, he went on the front foot, but was nowhere near the pitch of a ball that turned past him. He ended up dragging his back foot too much, and was stumped by Kiwi skipper Tom Latham. Overall, it’s the third time that Santner bagged the prized wicket of still the premier batsman in world cricket. It was the fifth time Kohli was stumped in his 261 ODI innings, which have come in 270 ODIs.

Virat Kohli (ANI Photo)
That this ‘run-machine’ can succumb to the ball leaving the bat can be gauged by the fact that both Aussie leggie Adam Zampa, who is not in the Aussie touring party next month, and Bangladesh’s left-arm spinner and captain Shakib Al Hasan have had his number five times each, while England leg-spinner Adil Rashid and former Sri Lankan left-arm spinner Rangana Herath have dismissed him twice each, in ODIs. This is nothing to be embarrassed about. When you have had a peerless career like that of Kohli’s, bowlers of all sorts will dismiss you.
It’s just that in his peak, Kohli was unstoppable. Now, perhaps spinners feel more confident on helpful surfaces against him.
“Surprisingly, for an Indian batsman, Kohli doesn’t use his feet against spin as much,” a former India player told TOI.
While here’s its Santner, in Bangladesh it was Taijul Islam, another talented left-arm spinner, who had Kohli’s number again and again. Kohli’s scores in the two-Test series, played on turning tracks, but not absolute dust bowls, were 1, 19*, 24 & 1.
In the first innings of the first Test at Chittagong, he was trapped lbw on the backfoot by a ball turning from leg to the middle stumps. In the second innings of the second Test at Mirpur, he was caught at short leg of an edge while trying to defend against off-spinner Mehidy Hasan Miraz.
Perhaps, a few fruitful sessions with his ‘batting guru,’ RCB head coach and ex-India batting coach Sanjay Bangar before the Australia series might help Kohli rediscover his mojo against spin too.