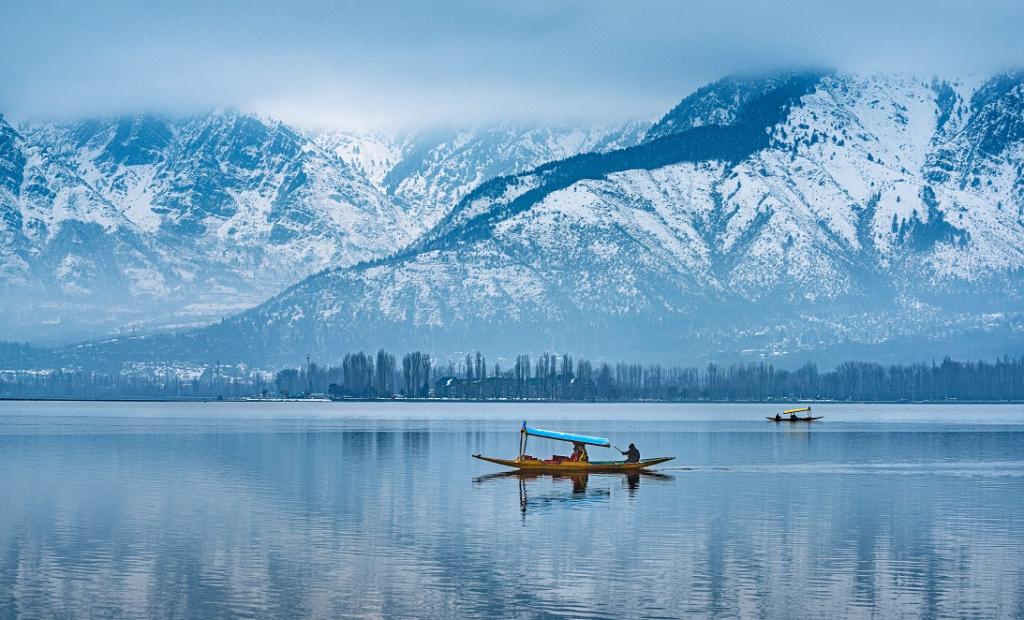 A shikara glides over the Dal lake in the shadow of the Zabarwan Range in Srinagar, Kashmir. Photo: iStock

The Kashmir Valley is shivering, as is usual at this time of the year. From December 21 to January 29, the Valley experiences what has traditionally been known as ‘Chillai Kalan’.

Chillai Kalan is a combination of two Persian words — ‘Chillai’ meaning ‘Forty’ and ‘Kalan’ meaning ‘Big’. So, the word means the ‘Big Forty’.

Kashmir’s famously harsh winter has been a constant presence in all aspects of the lives of its inhabitants since millennia. From food, clothing, economy, social life, politics and lastly, literature, winter is omnipresent.

Neerja Mattoo is the author of a number of books on Kashmiri literature including The Mystic And The Lyric (2019). She spoke to Down To Earth from her home in Srinagar on how the Kashmiri winter seems to be losing its hold on the Valley. Edited excerpts:

Rajat Ghai: As far as I know, the use of Kashmiri as a language began in the late Middle Ages before which writers and poets in the Valley used Sanskrit (and / or) Pali. Do we have references or mentions to Kashmir’s harsh winter in Sanskrit / Pali literature?

Neerja Mattoo: The only reference that I have seen for myself is in Kalidasa’s Kumarsambhava in which he talks about the cold of the Himalayas; how the people live here; how they shiver in winter and how it is difficult to keep themselves warm. Kalidasa makes these observations while referring to the intense penance that Goddess Parvati does to win Lord Shiva’s affection and love.

RG: Was Kashmir’s climate a frequent theme in poetry and prose, whether in Sanskrit, Pali, Kashmiri, Persian or Urdu?

NM: I will only talk about Kashmiri. The 14th century Kashmiri mystic Lal Ded, also called Lalleshwari or Lalla Arifa, talks about how things freeze in winter and how water turns to ice which then melts and becomes water again. She uses metaphors of freezing and cold for philosophical explanations.

Sheikh Nooruddinn Noorani, known variously as ‘Nund Rishi’, ‘Sheikh-ul-Alam’ and ‘Alamdar-e-Kashmir’, the founder of the Rishi or Reshi Sufi tariqa or order also talks about the cold.

In one of his compositions or Vaakhs, Nund Rishi talks about how humans have to suffer the vagaries of nature. He writes that sometimes you do not have clothes to wear and your body is exposed to the icy winds blowing from the Jhelum in winter. And then, suddenly, you have a warm quilt over you and your wife sleeping by your side and things change.

Winter is thus a constant theme. This period of Chillai Kalan which stretches for 40 days is an especially severe time when everything freezes. The harshness of the weather and how it is borne patiently by human beings are a source of various metaphors in recorded Kashmiri literature since it began in the 14th century.

RG: Are there differences in the way in which Kashmir’s Shaivite and Sufi writers have perceived climate in their works over the centuries?

NM: It is very strange that even though these are supposed to be two different philosophical traditions, there are many similarities. This is because Kashmir Shaivism is not exactly like traditional Sanatana Dharma.

It is a very different kind of belief which holds that the world is not an illusion but has come about because of the vibrations created by Shiva Himself.

The Sufis also have a similar worldview that material things don’t matter. What they think is that the soul aspires for a union with the Supreme Reality.

There is no idolatry in Kashmir Shaivism. There are Tantric rites, yes. But Kashmiri Pandit places of worship never had idols except those built by Hindu kings up to the 8th and 9th centuries.

But we do have holy rocks, trees and springs. These are the things that we worship. The modern Hindu temples in the Valley came up during Dogra rule.

The Sufis of Kashmir, like everywhere else, also have beliefs that are different from orthodox Islam. They believe in meditation, seclusion and temperance. In fact, the Sufis of the Reshi tariqa were vegetarian. They preferred to eat dried rather than young, living vegetables.

RG: While researching for this interview, I found the names of folktales recited during Chillai Kalan for several generations — Ake-Nandun, Heemal-Nagrai, Wuzra-Maal, Beebash Noor, Taalav-Raazdaen and Gulnoor. What is the base for these? Sanskrit or Persian literature? Or a mix of both?

NM: Both. Heemal-Nagrai is a typically Kashmiri legend. According to Hindu mythology, the Kashmir Valley was once a lake which was the abode of the Nagas or the serpent race (The Satisar story about the formation of the Kashmir Valley mentioned in the Nilamata Purana).

Most of our holy springs are known as ‘Nag’ as they are thought to be dedicated to those Nagas. Nagrai is supposed to be the Prince of Serpents. He lived in the Underworld. He assumed human form, came to the Earth and fell in love with princess Heemal. There is tragedy but ultimately the story ends with their union.

Ake-Nandun is similar to the story of Abraham sacrificing his son (Isaac in the Judaeo-Christian tradition and Ishmael in the Islamic one).

Bards or daastangos used to recite these fables or daastans. This was the main source of entertainment for Kashmiris during the harsh winters.

RG: Now that climate change is happening, with a visible impact on the Kashmir Himalayas, is that reflecting in today’s Kashmiri and Urdu literature from the Valley too?

NM: I don’t think people are consciously doing it. But there is a lament that we do not get as much snow now as we used to once.

When I was a child, we used to have three feet of snow at times. But now, we have six inches or a foot of snow at the most.

There were times during my childhood when everything would freeze. Roads were not clear. People had to walk over frozen paths. They would slip, sometimes break a leg. That kind of harsh winter does not exist anymore.

Many of our springs and other waterbodies have disappeared. There used to be a spring in Pampore, supposed to have been created by Lal Ded herself in the 14th Century called the Lal Trag which has disappeared.