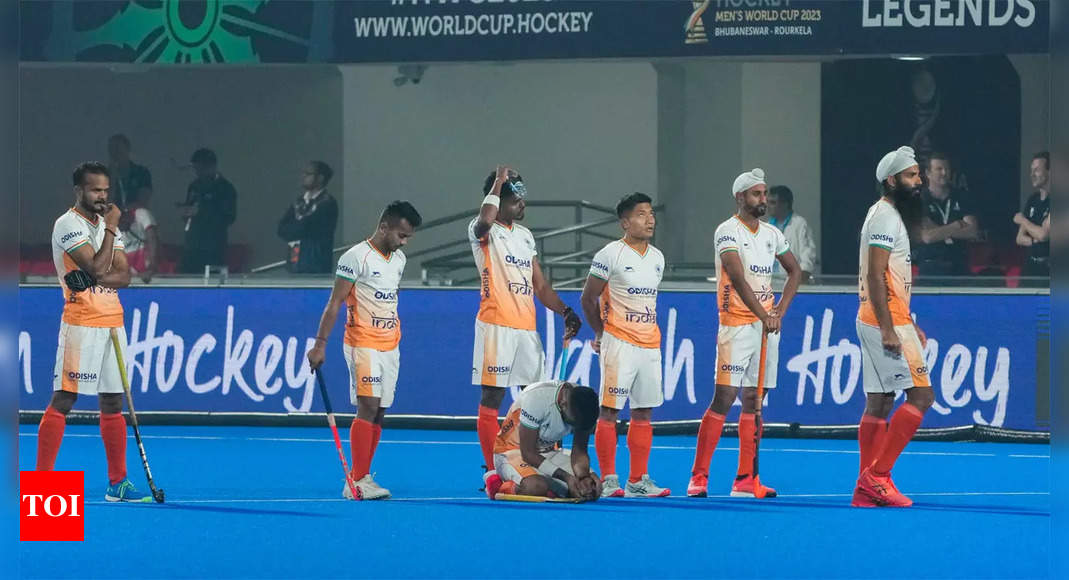 Share If you like it
BHUBANESWAR: India’s 48-year wait for another Hockey World Cup title will cross five decades. The sad part of India’s history in the tournament has gotten sadder. While it puts into perspective what it takes to win the World Cup, Sunday at the Kalinga Stadium was also about the current team’s mental block and resultant poor decision-making.
New Zealand sensed 11 nervous Indians in the last quarter when they were chasing the game 2-3 down. They not just scored the equaliser in the 50th minute to make it 3-3 but also continued to be the aggressor despite a man (Nick Ross) serving yellow-card suspension for five of the last six minutes and 15 seconds on the clock.

India’s nerves perhaps also showed in the line-up they picked for the shootout. Besides the out of form and low on confidence skipper Harmanpreet Singh, the young quartet of Rajkumar Pal, Abhishek, Sukhjeet Singh and Shamsher Singh were asked to handle pressure standing on the edge of a World Cup exit, while the experienced Manpreet Singh, Akashdeep Singh and Lalit Upadhyay cooled their heels in the dugout.

The shootout takers, of course, depends on the team’s pre-match plans and training; but there certainly are Plans B and C if the situation demands a change, especially to handle the pressure of a World Cup knockout game. Sunday was one such evening when those plans weren’t used by India. While nothing can be taken away from their quality as players, the young legs of Abhishek, Shamsher and Sukhjeet succumbed to that pressure in the shootout.
The rub of the green then went New Zealand’s way in sudden death when India’s first-choice goalkeeper PR Sreejesh got injured after saving thrice in a row in one-on-ones to keep India in the hunt. But when Sam Lane put the ball past Sreejesh’s deputy Krishan Pathak, the 15,000 fans in the stadium couldn’t believe their eyes.

Hosts India made a shock exit from the FIH Men’s World Cup after losing to New Zealand 4-5 in sudden death in their must-win crossover match.<br /><br />

In the penalty shootout, the scores were also tied after the first five set of strikes, and the match was finally decided via sudden death.<br /><br />

Captain Harmanpreet Singh had the golden chance to take India to victory in sudden death but he failed to do that as he missed the target.<br /><br />

Veteran goalkeeper PR Sreejesh made two saves in the shootout to rescue India after they were 2-3 down. <br /><br />

Sreejesh saved another one during the sudden death and got himself injured and Krishan Pathak replaced him in the next three rounds of strikes. Finally, Shamsher Singh missed and Sam Lane scored to hand New Zealand the win.<br /><br />

New Zealand will now face defending champions Belgium, who topped Pool B, in the quarterfinals on Tuesday.<br /><br />

In the regulation time, India earned as many as 11 penalty corners and converted two of them while New Zealand got just two PCs.<br /><br />

Yet again, it was a case of ample goal-scoring opportunities for India but the forwards lacked finishing skills.<br /><br />

India were on the offensive as soon as the match began with Mandeep Singh, who started despite taking a hit on his knee during training on Saturday, making a fine run into the New Zealand circle.<br /><br />

Harmanpreet’s drag-flick was palmed away by the New Zealand goalkeeper but it went up high and Sukhjeet was at the right place at the right time to volley it in.<br /><br />

New Zealand pulled one back a minute before half time as Sam Lane deflected a Child’s low cross from the left into the Indian goal. India were 2-1 up at the half time. New Zealand pressed for an equaliser in the third quarter and they got into the Indian ‘D’ on a few occasions but the home side swelled its lead by two goal margin through a penalty corner conversion in the 41st minute.<br /><br />

India earned three penalty corners in the third quarters, and scored from the third PC and seventh overall with Varun Kumar sounding the board cleanly.<br /><br />

In the last quarter, New Zealand made a spirited fightback and restored parity in the 50th minute following their second penalty corner of the match as Sean Findlay deflected in a Hayden Phillips strike.<br /><br />

Goalkeeper Krishan Pathak saved India from disaster as he palmed away a high shot from Sam Hiha in the 51st minute.<br /><br />

In the earlier crossover match of the day, Spain beat Malaysia 4-3 in penalty shootout to qualify for the quarterfinals after the two sides were locked 2-2 in the regulation time.<br /><br />

Coach Graham Reid was expectedly welcomed with some fiery questions at the post-match press conference, some of which he found difficult to answer.

(PTI photo)
Q. Where did things go wrong between the Tokyo Olympics bronze medal and this World Cup?
Reid: Obviously our penalty-corner conversion, but also we had a lot of circle penetrations but we couldn’t convert those…In defence, we probably needed to be in front a bit more and a bit tighter.
Q. Did a low percentage of penalty-corner conversion cost us the World Cup?
Reid: Yeah, it is a factor, (but) not the only factor. We still created enough (chances) to win. The problem was every time we won the ball, we gave it back to them and that was the telling factor. They got their second or third goal after we gave the ball back to them just after we had won it; it gave them an opportunity. At this level you can’t do that.
Q. What next for the team going forward ?
Reid: The next two games (placement matches) are my main focus. In February-March we come back to Rourkela and play against Germany and Australia in the Pro league matches. I think then there is the Australia Test series as well in India…Details are being worked out. But for me, the focus is on our next game, which is against Japan.
Q. Do you think the boys faltered in pressure situations?
Reid: I am sure pressure and expectations all come into the mix. We made mistakes, which we don’t normally do. We need to analyse and talk about it and come up with a solution before our next game.
Q. We gave up a two-goal lead twice and have been talking of circle penetrations and creating opportunities for a long time. What do you think is actually plaguing us?
Reid: Tonight is about consistency. We let ourselves down in the last quarter, threw the ball away and stuff like that which makes it difficult. Every team will have issues with converting circle penetrations. We probably have to go back to the drawing board. It’s very hard at the end of a game to answer questions like that…It’s skill execution we need to get better at.
Q. With the benefit of hindsight, do you think we could have selected better players for the World Cup?
Reid: We still have two more matches to play. I am not going to make any comments on the players. We need to make sure this group is up for our next game.
Q. India has been waiting for 48 years to win a medal at the World. How long will we just keep creating chances and not scoring off those?
Reid: It’s an interesting and a very good question. I don’t know the answer. I think at the end of the day you have to keep practicing and keep creating opportunities. It’s very hard to score if we don’t (create chances). As far as drills, training and everything else is concerned, we do what all other teams do. I have been in this game for a long time and I know what other teams do. I don’t think there is necessarily a silver bullet. I think following this, we will try and work out how to get a mental coach involved. We need to do something different perhaps.