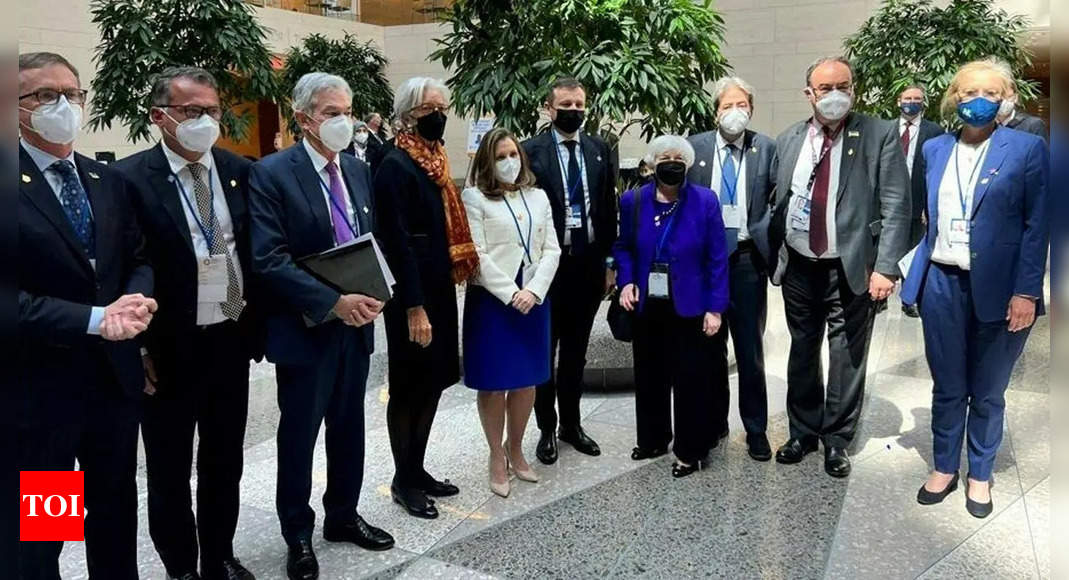 Share If you like it
WASHINGTON: US Treasury Secretary Janet Yellen and her counterparts from the mostly western bloc walked out of a G20 finance boffins session on Wednesday as Russian officials began to speak, a boycott — to protest Moscow’s war on Ukraine — that was not joined by officials from at least ten other nations, including Indonesia, China, India, Brazil, South Africa, and Saudi Arabia.
A photo posted on social media by Canada’s finance minister Chrystia Freeland showed ten finance officials, including Britain’s Chancellor of the Exchequer Rishi Sunak, who walked out of the meeting. “The world’s democracies will not stand idly by in the face of continued Russian aggression and war crimes. Russia’s illegal invasion of Ukraine is a grave threat to the global economy. Russia should not be participating or included in these meetings,” Freeland wrote.

The world’s democracies will not stand idly by in the face of continued Russian aggression and war crimes. Today Ca… https://t.co/a80Q0pTUAO

“We are united in our condemnation of Russia’s war against Ukraine and will push for stronger international coordination to punish Russia,” Sunak said in a separate tweet.

Earlier my representatives, along with US & Canadian counterparts left today’s G20 meeting in Washington as Russian… https://t.co/TR4aGCOlxK

But despite the US-led effort to isolate Russia and project the narrative that much of the world is united behind the western alliance, a global majority continued to engage Moscow.
Indonesia’s finance minister Sri Mulyani Indrawati, who was chairing the session, India’s Nirmala Sitharaman, and several other finance ministers sat through the virtual presentation by Russia’s finance minister, Anton Siluanov, pointing to an awkward schism in the G20 finance minister meeting ahead of a heads of government summit meeting in Bali in November.
Indonesia, which holds the presidency of the G20 Summit, is in a particularly tough spot amid calls to expel Russia from the Group. Like India, it is also continues to trade with Russia, and it has said it has a duty, as a host, to invite all members, and President Putin is welcome to attend the meeting.
On Wednesday, the country’s finance minister Indrawati put on her best spin on the US-led boycott, saying the walkout — supported by the Biden White House — was “not a total surprise” and it was not disruptive to the group’s wider discussion.
The differences and schism over Russian participation notwithstanding, Sitharaman too pressed ahead with bilateral engagements with US interlocutors on the margins of the IMF spring meetings, meeting US Commerce Secretary Gina Raimondo for what Indian officials said was discussions to “strengthen Economic Cooperation in the bilateral and global contexts.”

Council of Europe Suspends Russia for Its Attack on Ukraine

Fire at Ukraine Nuclear Plant Is Out, but Russian Troops Take Control

Newspaper headlines: ‘Get out’ of Ukraine and Russia could invade ‘any day’

Glyn Johns is a Fashion Favorite in ‘The Beatles: Get Back’

the people may know best

Putin Has Choice of Blitzkrieg or Minor Incursion in Ukraine

Russia’s Assault in Ukraine Slows After an Aggressive Start

Very Peri is Pantone Colour of the Year For 2022

Putin Has Choice of Blitzkrieg or Minor Incursion in Ukraine