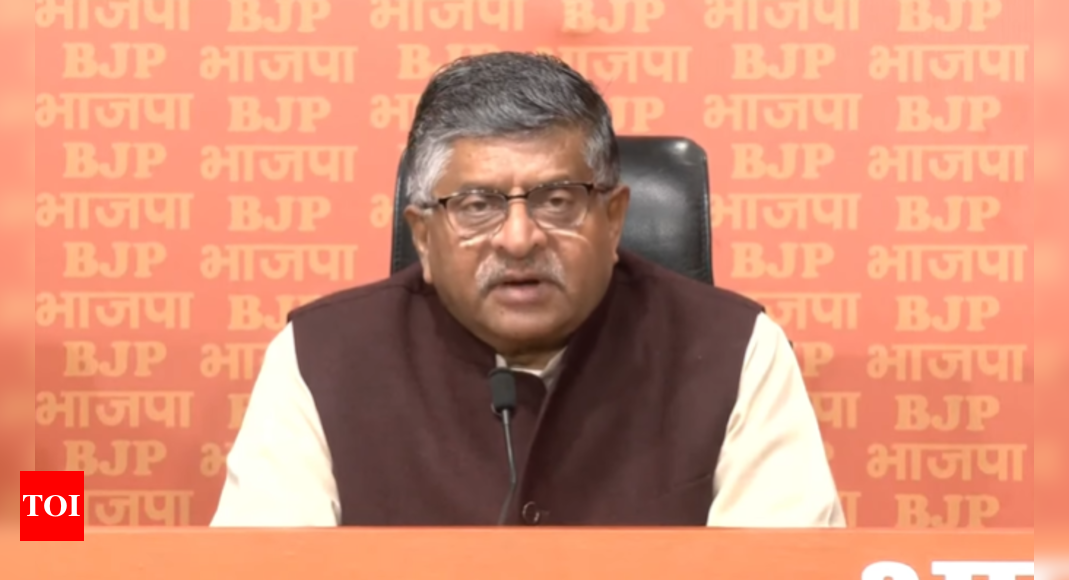 Share If you like it
NEW DELHI: The BJP on Tuesday attacked Congress MP Rahul Gandhi for not being able to “teach” party leader Digvijaya Singh to respect the Army “even though they have spent so much time walking together for Bharat Jodo Yatra“.
“Rahul Gandhi ji, even after walking thousands of kilometers with you, why couldn’t you teach Digvijaya Singh to respect the Army? This is not the first time he [Singh] has spoken against the Army. This time he did it in Kashmir, it is a matter of great shame,” said BJP leader Ravi Shankar Prasad during a press conference.

He also demanded that the Congress make its stand clear on the issues of terrorism and national security.
‘His personal views’
The attack came hours after Rahul Gandhi distanced himself and the party from Singh’s remarks questioning the veracity of the 2016 surgical strike.
“We are a democratic party, not a dictatorship. These are his [Digvijaya Singh’s] personal views, and we don’t appreciate them,” he said, adding: “I don’t agree with the statement of Digvijaya Singh. It is crystal clear that we disagree with it. It is the official position of the Congress.”

He further added that the party leadership has “utmost respect for the armed forces … the Armed forces don’t need to provide any proof”.
‘Why did it take Rahul Gandhi so long?’
Reacting to Rahul’s statement, the BJP retorted: “For the first time, Rahul Gandhi said he respects the Army.”
“Why did Rahul Gandhi take so long to publicly declare his respect for the armed forces,” Prasad asked, adding that the Congress has a habit of projecting uncomfortable views of its leaders as their personal views and asked if there is any limit to such opinion.

“The question is what is the standard of these leaders when it comes to respecting our armed forces. Indians do not seek proof of their heroics but salute them,” Prasad told reporters, noting that Singh has a history of taking controversial stands, be it visiting families of suspected terrorists killed in the Batla House encounter or praising radical Islamic preacher Zakir Naik.
Attacking Gandhi for his “vacillating” stand on armed forces, he also cited some of his previous remarks, including a recent comment in Dausa during the Bharat Jodo Yatra questioning the government’s handling of the border standoff with China and claim that the Chinese were “beating up” Indian soldiers.
He had used the “khoon ki dalali” barb after the 2016 surgical strikes to attack the Modi government and gone to the Jawaharlal Nehru University (JNU) to extend moral support to “tukde tukde gang”, Prasad told reporters.
Why it took him so many years to say publicly that he respects armed forces, the BJP leader asked. He should have also said “sorry” for what he had said earlier, Prasad added.
He also took a dig at Congress leader Jairam Ramesh for physically preventing a journalist from asking questions to Singh on his statement about the surgical strikes and the 2019 Pulwama terror attack in which 40 CRPF personnel were killed.
‘No proof’
On Monday, Congress leader Digvijaya Singh targeted the Centre, alleging that it gave no proof of surgical strikes though it claimed to have killed many terrorists.
“They talk of surgical strikes. They claim to have killed so many people but no proof is given. They are ruling by peddling a bundle of lies,” he said.
In a tweet in Hindi, he said: “From where did the terrorists get 300 kg of RDX in Pulwama incident? DSP Davinder Singh was caught with terrorists but then why was he released? We also want to know about the friendship between the prime ministers of Pakistan and India.”

The BJP condemned his remarks, and said that such comments show that the Rahul Gandhi-led foot march across the country is ‘Bharat Jodo Yatra’ only in name while he and his party colleagues are working to “break” the country,” BJP spokesperson Gaurav Bhatia said. “It is essentially “Bharat todo yatra” he added.
(With inputs from agencies)
Watch Surgical strike row: ‘Don’t agree with Digvijay Singh’s personal views, says Rahul Gandhi